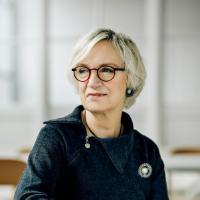 She received funding from HERA (Humanities in the European Research Area) for a project on copyright, creativity and cultural heritage institutions (2010-13) and headed the project, The Past's Future (2015-19), which was funded by the Velux Foundation. She received a Carlsberg Foundation Semper Ardens Monograph Grant in 2019 and was a Leverhulme Visiting Professor at the University of Cambridge in 2021.

Among her monographs and edited volumes may be mentioned Legally Speaking: Contemporary Culture and the Law (1999), From Civil to Human Rights: Dialogues on Law and Humanities in the United States and Europe (2009), Copyright and Other Fairy Tales: Hans Christian Andersen and the Commodification of Creativity (2006). Her edited volume (together with Lucky Belder), Negotiating Cultural Rights: Issues at Stake, Challenges and Recommendations, came in 2017, and her monograph, The Transforming Power of Cultural Rights: A Promising Law and Humanities Approach, was published by Cambridge University Press in 2019.

She co-edited The Right to Science: Then and Now (Cambridge University Press, 2021), and her monograph Science as a Cultural Human Right was published in the University of Pennsylvania Press Studies in Human Rights Series in 2022.

United States history, with special emphasis on the role of the courts, law and lawyers.

Helle Porsdam is currently working on the right to science - one of the cultural rights mentioned in both the 1948 Universal Declaration of Human Rights and the 1966 International Covenant on Economic, Social and Cultural Rights. She is the co-editor (with Sebastian Porsdam Mann) of The Right to Science: Then and Now (Cambridge University Press, 2020). Her monograph Science as a Cultural Human Rights was published in the University of Pennsylvania Press Studies in Human Rights Series in 2022.

She also has a scholarly interest in science diplomacy and scientific freedom.