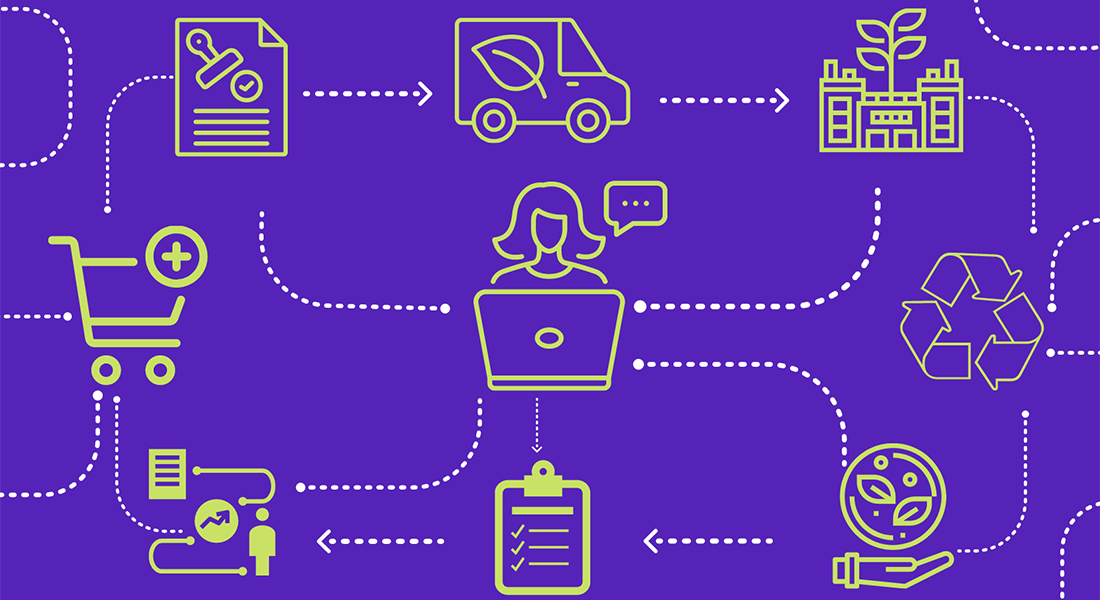 On the 9th September 2022, the Purchase Power – Sustainable Public Procurement Through Private Law Enforcement PurpLE project was launched with an international seminar introducing the project's main themes at the Faculty of Law, University of Copenhagen. Public procurement professionals (scholars, lawyers, and practitioners) from Denmark and from around Europe gathered to hear more about the PurpLE project and give their feedback on the planned scope of the research that will be thoroughly researched during the next three years. The seminar was structured into three panels: roundtable.

The seminar started with associate professor Marta Andhov's - the project's PI  - warm welcome to the participants and a round of introductions. The PurpLE project structure, aim and research questions and the plan on how to achieve the set goals were introduced. Afterwards, two PurpLE research fellows presented their initial research plans. It is worth pointing out that a third postdoc will join the project from August 2023. 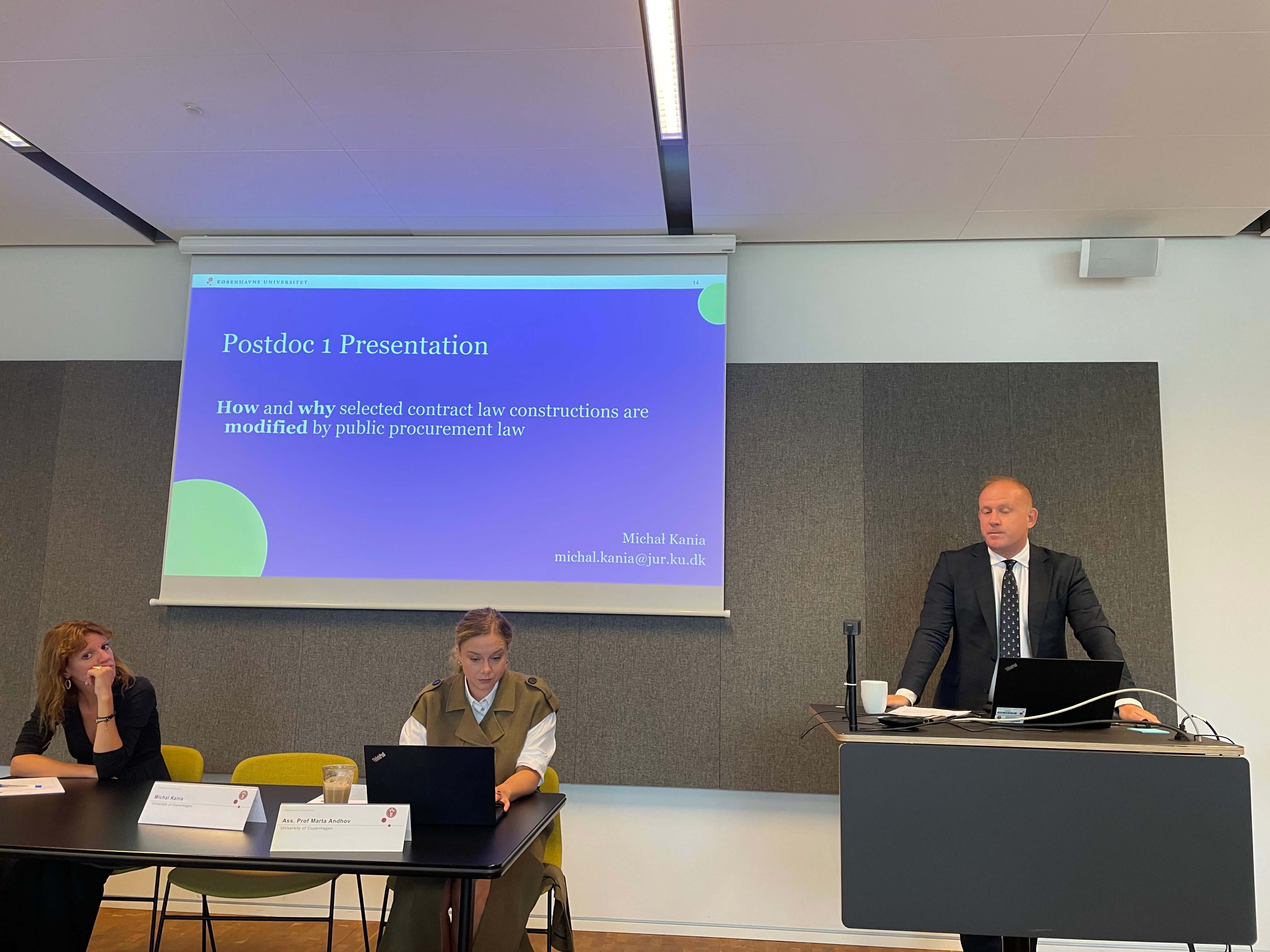 Michal Kania started by presenting the main research question of "how and why selected contract law constructions are modified by public procurement law". One of the aspects of the potential point of reference of the planned research is the contract regulations contained in the Model law - Draft Common Frame of References, as well as contract regulations in the selected national legal jurisdictions. The research question refers to the context of the current challenges of the post-pandemic period and the war in Ukraine. Both events have significantly affected the economic situation, including the performance of public procurement contracts. Problems that arise in this context include, among others: labour shortages, interruptions in supply chains, price increases, and limited availability of products. Rising energy prices and inflation are the latest challenges for contracting authorities and contractors. Indicted challenges often result in the need for modification or termination of public procurement contracts. They also affect the liability issues of the contracting parties.

Moreover, the current geopolitical situation results in the adoption of several new legal solutions at the EU's level. These administrative regulations limit the freedom of contracting authorities to contract by excluding specific categories of entities from the circle of potential contractors. The current crises result in the questions of how their effects should be legally classified in the context of such legal constructs as the contract law clauses of rebus sic stantibus and force majeure. What should be the understanding of these clauses regarding the concept of" unforeseeable situations" referred to in Article 72(1)(c) of the Directive 2014/24/EU? Does the current public contracts regulation fit its purpose, or should it be extended toward classical contract law principles? What is the contemporary (COVID-19, war in Ukraine) standard of diligent contracting authority? What should be the extent of interference of public law regulations in the freedom of contracting in public procurement? Michal will aim to find answers to the abovementioned questions. 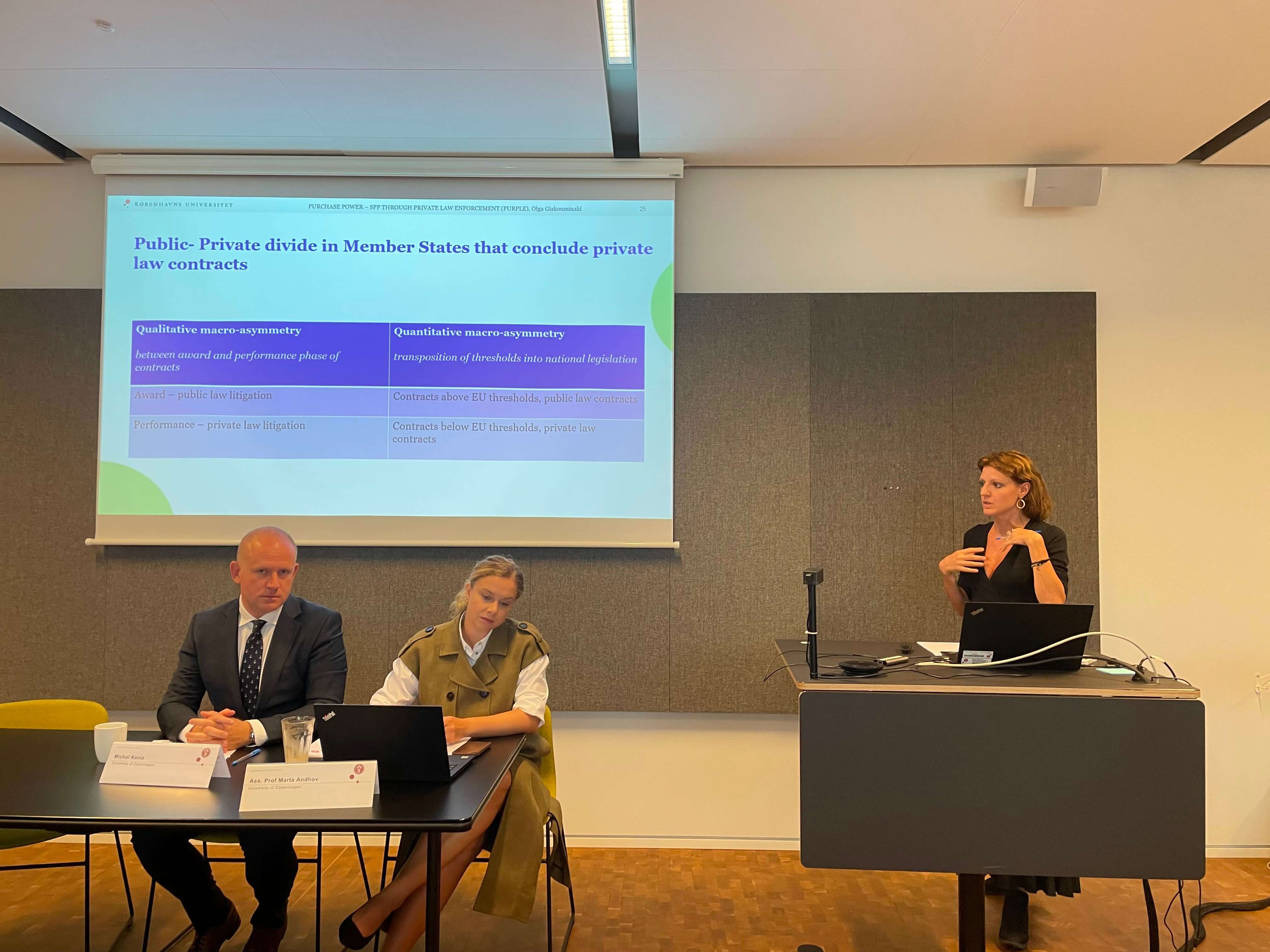 The fiddly interaction between public procurement and civil law and its impact on the pursuit of sustainable objectives enshrined in EU law is the focus of Olga's Giakouminaki postdoctoral research. The starting point of her presentation was the rich palette of national procurement traditions in the field, followed by the availability of third-party litigation across all procurement traditions, made possible in civil procurement contracts post-Europeanisation of the sector. The presentation aimed to illustrate the difference between the initial civil procurement contract and the chain of civil contracts emerging whenever the contractor decides to subcontract. The limited overview of the contractual chain is particularly relevant as regards sustainable clauses since they may be omitted for several reasons, such as cost efficiency, the unreadiness of certain industries towards sustainability aspects etc. This obscurity regarding potential modifications of the sustainability clauses is of particular importance in public procurement contracts since it needs to be examined whether such changes can be qualified as substantial ones and be caught by the standards set in, e.g. C-454/06. Pressetext case. As a result of the above, the sustainability agenda, a core value of modern EU law, becomes decentralized, depending upon the adjustability of national contract law to such considerations. Closing her presentation, Olga pointed out the uncertainties of her focus, mainly revolving around the pertinent delimitation of the research. How can the contracting authority and the unsuccessful bidders monitor the contractual chain, considering that they are third parties to all of the contracts? How can the subject matter of the contract become green so that the sustainable contractual clauses can be liberated from the pressing obligation to be related to it? Are sustainable clauses arbitrable, given the importance attached to them? Olga's research focus aims to answer these questions.

After the PurpLE presentations, prof. Michael Steinicke from Aarhus University gave a keynote on interaction and the nature of conflicts between private law and public procurement from a Danish perspective. After the general introduction, Michael focused on four Danish Contract Law provisions (§ 30 deceit/fraud, § 32 erroneous declarations, § 33 common decency, § 36 unreasonableness or at variance with the principles of good faith for enforcement). He concluded that three of the provisions focus on the pre-contractual process. It is doubtful that such considerations could impact a pre-contractual system like public procurement, as all steps during the procurement process are found in the procurement rules. Prof. Steinicke also points out that the provisions in the Danish Contracts Act have their most significant value in situations where they can be used flexibly, which is often not possible within the framework of the public procurement system due to procedural restraints (must use the procurement procedure) and substantial restraints (cannot change the content in any meaningful way). Michael and participants debated the scope of possible applicability of § 36, highlighting that even if not directly, indirectly, § 36 might potentially be used in the context of public contracts.

The second panel, moderated by prof. Roberto Caranta from the University of Turin focused on the perspective of contract law scholars on the interaction of contract law and procurement law. Prof. Ole Hansen from the University of Copenhagen reflected on de minimis modifications from Art. 72(2)(ii) Directive 2014/24/EU using construction contracts as an example. He critiqued the narrow legal possibilities for contract modifications highlighting how prone to change construction contracts are. Ole highlighted the striking difference between public and private contracts. Under Danish contract law, the latter accommodates much more the commercial realities and the need for modifications, ensuring much-needed certainty in contract law. The reference was made to the contract law principle of loyalty to the contracting party leading to collaboration on solving the problem without leaving each other "empty-handed". Ole noted that utilising the principle of loyalty most presumably conflicts with public procurement law's principles of equal treatment, non-discrimination, and competition. Finally, Ole underlined that to determine the content of procurement law, contract law must be involved and understood in its own premises.

Professor of comparative private law Cristina Poncibò, from the University of Turin, presented contract law as a system of values and questioned how these values might be constrained due to the importance of public interest and social goals omnipresent in public procurement law. Later, she opened a discussion and presented the topic of "Public procurement and contract law in achieving the SDGs", where she pointed out the problem of enforcement and proposed possible solutions (preventive measures, ex-post interventions, formal remedies, third party enforcement). She concluded that the synergy between the two could be found in re-considering contract law and public procurement law in the light of a group of shared values (e.g., SDGs).

The third panel focused on alternative dispute resolutions in the context of public procurement. Prof. Alberto Oddenino from the University of Turin introduced the ADR and its relevance for private-public law interplay. To create a framework for the analysis, he first compared state courts and arbitral tribunals in terms of jurisdiction, procedure, costs, legal aid, appeals opportunities, binding nature and enforcement mechanisms. Alberto focused on the ADR features that might or might not come into conflict with procurement law principles: consensual nature, choice of arbitrators, adaptability/flexibility and confidentiality of the process, certainty and finality of the decision, costs of the process and enforcement of the decision. Finally, consideration was given to the possibility of pre-contractual application of ADR in public procurement.

The final presenter of the day was prof. Clement Salung Petersen from the University of Copenhagen posted two questions:

When answering these, Clement focused on issues of post-contractual arbitrability of procurement disputes, pointing out various sources and cases under EU Law and several national jurisdictions.

The day was concluded by a roundtable where the presenters and participants brainstormed on how the PurpLE research plan could be further improved, what elements are worth considering and how meaningful collaborations can be established to ensure the broader societal impact of PurpLE research.