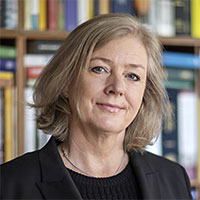 Ulla Neergaard is Professor of EU Law at the University of Copenhagen and publishes widely within that area of law. She also has substantial experience in senior non-executive roles in the public sector in Denmark. She was formerly President of a prominent EU wide legal professional institution, which coordinates expert input on significant issues of EU Law.

Ulla has held several appointments as an “expert member” to several boards/committees (among others the Danish Council of Competition and the Danish Energy Regulatory Authority). Most recently she has been a member of the Appeals Permission Board (i.e. “Procesbevillingsnævnet”). The board performs a central role in the Danish court system as it determines whether appeals should be entertained by the appeals courts, and her role was as an independent member. She presently functions as alternate in the board of directors of the Danish Court Administration (i.e. “Domstolsstyrelsen”).

Ulla was President of the International Federation for European Law (FIDE) from 2013-14 and organised the FIDE-Congress in 2014. The themes of that conference were: The Economic and Monetary Union: Constitutional and Institutional Aspects of the Economic Governance within the EU; 2) Union Citizenship: Development, Impact and Challenges; 3) Public Procurement Law: Limitations, Opportunities and Paradoxes; and 4) In the Era of Legal Pluralism: The Relationship between the EU, National and International Courts, and the Interplay of the Multiple Sources of Law (Post Congress Materials). The Presidency involved preparations which lasted several years, including cooperation with persons working across Europe, and coming from private organisations/companies, universities, EU-institutions, national authorities and courts. Besides the research coordination itself, it also involved e.g. fund raising (most importantly nearly 1 mio DKK from private foundations), and publication of three printed books and one website-book (altogether nearly 2,600 pages). Ulla Neergaard is currently President of the Danish Association for European Law, which is the Danish member association of FIDE, as well as member of the Steering Committee of FIDE itself.

Ulla Neergaard has published widely in various areas of EU Law. For example, besides the FIDE-project mentioned above, she has been involved in the following larger research projects: “Blurring Boundaries: EU Law and the Danish Welfare State” (granted almost 3 mio DKK from the Danish Research Council); “Towards a European Legal Method: Synthesis or Fragmentation” (granted nearly 2 mio DKK from the Danish Research Council); “Legal Issues of Services of General Interest”; “All Rights Reserved? Barriers towards EUropean CITIZENSHIP” (“FP7-project”, granted 6.5 mio Euro from the European Commission; the amount thereof to Ulla Neergaard’s group at the Faculty of Law was a little less than 300.000 Euro plus a bonus of 500.000 DKK for research purposes to Ulla Neergaard from the University of Copenhagen); and “The Choice for Europe since Maastricht – Member States’ Preferences for Economic and Fiscal Integration” (“Horizon 2020 project”). In fact, Ulla Neergaard has for a period of approximately 10 years been working on externally funded research projects, and has over the years been successful in raising fairly significant amounts of external funds.

As examples of recent publications in English, the following may be mentioned: “Activist Infighting among Courts and Breakdown of Mutual Trust?  The Danish Supreme Court, the CJEU and the Ajos Case” (together with Engsig Sørensen, Oxford Yearbook of European Law); “Europe and the Welfare State – Friends, Foes, or…?” (Oxford Yearbook of European Law); “’When Poverty Comes in at the Door, Love Flies Out the Window’: The Influence of Eurozone Reforms Upon the Social Dimension of the EU – and Vice Versa” (European Labour Law Journal); and “’A More United Europe’ and the Danish Conundrum” (book chapter in “The Future of Europe: Political and Legal Integration beyond Brexit”, Hart Publishing, Oxford). In Danish, the following examples may be mentioned: “Euro-forbeholdet” (book chapter in “EU-retten i Danmark”) and “EU-ret” (text book written together with Nielsen and consisting of about 650 pages).

Ulla Neergaard is a member of the advisory boards of the Common Market Law Review and the Nordic Journal of European Law, and is a member of the editorial board of “Europarättsligt Tidskrift”. Also, she is a co-editor of the book series “Legal Issues of Services of General Interest” (Asser Press/Springer). She is often used as a peer reviewer, among others for Oxford University Press and Cambridge University Press. She also acts as an assessor of PhD theses and in relation to senior academic appointments e.g. professors. She is one of the founding member of the network NNELS (“Nordic Network for European Legal Studies”) and is part of its informal governing body.

Ulla Neergaard has been and still is responsible of many of the EU-law courses (BA and MA) at the Faculty of Law at the University of Copenhagen, which mainly focus on the internal market. The mandatory BA-course, “EU-ret”, which runs every fall semester, involves up to 800 students and 20 teachers every year.

Ulla Neergaard is a member as well as part of the collective management of the Faculty of Law’s research centre, CECS (Centre for European and Comparative Legal Studies; see <jura.ku.dk/cecs/>).