In memory of Professor Steen Treumer 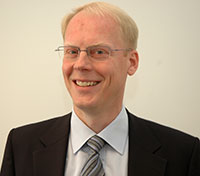 On Monday, August 16, the Faculty of Law lost a good colleague after a long illness. Steen passed away much too early, at the age of only 55.

In accordance with Steen’s wishes, this obituary is dedicated to his children, Christian and Julie.

Steen joined the Faculty of Law at the University of Copenhagen in 2009 as the Faculty's first professor of procurement law and had a long and distinguished career as a highly appreciated and respected scholar and colleague. Colleagues would describe Steen as a titan of work and a pioneer in his field, completely dedicated to his work. This commitment shone through in his scholarship, his teaching and generous collegiality.

It is not an exaggeration to say that Steen Treumer established public procurement law as a research field in Denmark and was one of the first movers internationally in public procurement law scholarship. He was an original and creative scholar, starting with his PhD thesis on "The principle of equal treatment in EU procurement rules ", which was the first thesis in Denmark on procurement law. In 2000, Steen was awarded the Spar Nord Foundation's Research Prize for this work as a particularly excellent research project. Today his PhD thesis is a fundamental work that is often cited not only nationally but also internationally, although the work has only been published in Danish.

Besides putting public procurement law as a scholarship on the Danish map, it was important for Steen that procurement law research contributed to society. Consequently, he gladly participated and contributed to various events, conferences and social debates for many years. Until his death, Steen served as an active expert member of the Danish Public Contracts Appeals Board. In this function, he contributed to many seminal decisions and it was probably no coincidence that cases in which  preliminary questions were referred to the European Court of Justice were cases in which Steen had participated as a member of the board.

In 2007, Steen helped establish the Danish Association for Public Procurement Law. An association he was chairman of for a long time and the purpose of which is to share knowledge of public procurement law. Steen was passionate about this and was an active speaker both nationally and internationally on his research topics. He also organised major conferences on procurement law topics and participated in several legislative preparatory working groups.

In his work, Steen paid much attention to the importance and role of the EU law for national law. This motivation early in his career took him to Maastricht, where he worked at the European Institute of Public Administration.

His interest in the interplay between EU and national law was one of the reasons why he, together with several renowned international researchers, founded the European Procurement Law Group in 2009. The group's purpose was and continues to be to conduct comparative research within public procurement law. New work is published almost every year in the international book series ‘European Procurement Law Series’ (Edward Elgar Publishing), which has been edited by Steen and Professor Roberto Caranta from the University of Turin, Italy. The group was of great importance to Steen, and many close friendships were created through this group.

In 2010, Steen was the main organiser of the Public Procurement - Global Revolution V conference held in Copenhagen. He believed in the need for a cross-disciplinary approach to public procurement scholarship. His support in this regard was expressed by his long-standing relationship with Professor Gustavo Piga, with whom he organised several interdisciplinary conferences on the interplay between law and economics in procurement law. The fruit of these conferences, a book on Applied Law and Economics of Public Procurement, was published with Routledge in 2013. Steen also served as an assistant editor for the internationally recognised journal "Public Procurement Law Review" for many years. Together with Professor Sue Arrowsmith from Nottingham University, he was part of a major EU funded research project" EU Asia link."

Besides many successes as a researcher, Steen was also a leader. From 2005 to 2009, he was head of the Legal Science Institute at the Copenhagen Business School.

Although Steen could not be present on campus so much in his last years, he remained an active member of his research centre (CEPRI) where he contributed with publications, research ideas and his broad experience from the world of research, and as a former head of centre one could count on Steen for a high quality contribution. He also retained responsibility for the EU Public Procurement Law course. He was involved in designing the course and teaching. He was rightly proud of his successful leadership of this course, for which he received much praise from the students and practitioners taking the course. He was a well-liked teacher and a competent supervisor who always took the time to debate and advise students along the way.

Steen was hugely appreciated by colleagues not only as a scholar, but also for his kindness, sense of humour and wit. Until his last days, he continued to do what he loved most – researching and contributing to science and society. Despite the difficult conditions caused by his illness, he always stayed optimistic and in good humour. He nurtured and encouraged many young scholars. It was a privilege to work with Steen; he will be greatly missed.

In Steen, we have lost an inspiring scholar, colleague and friend, who will be long remembered at the Faculty of law, in his research centre, and across the Danish and international scholarly community.