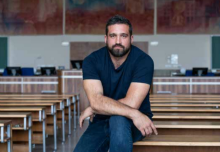 ​Petr Agha's research and teaching focuses on some foundational issues and challenges in contemporary law and politics. Petr holds a PhD in Law and Criminology from the University of Antwerp. He also obtained degrees in law, philosophy and political sciences from the Queens University Belfast, Glasgow University and Masaryk University Brno. He is the editor of Human Rights between Law and Politics (Hart Publishing), Law, Politics and the Gender Binary (Routledge) and Velvet Capitalism (forthcoming Routledge).

Before joining iCourts, Petr worked at the University of Antwerp, University of Helsinki, Czech Academy of Sciences and Charles University Faculty of Law in Prague.

At the University of Copenhagen, he will join the ERC project IMAGINE directed by Professor Jan Komárek at iCourts Centre of Excellence for International Courts. He will carry out a case study concerning the European constitutional imaginaries in the Czech Republic.