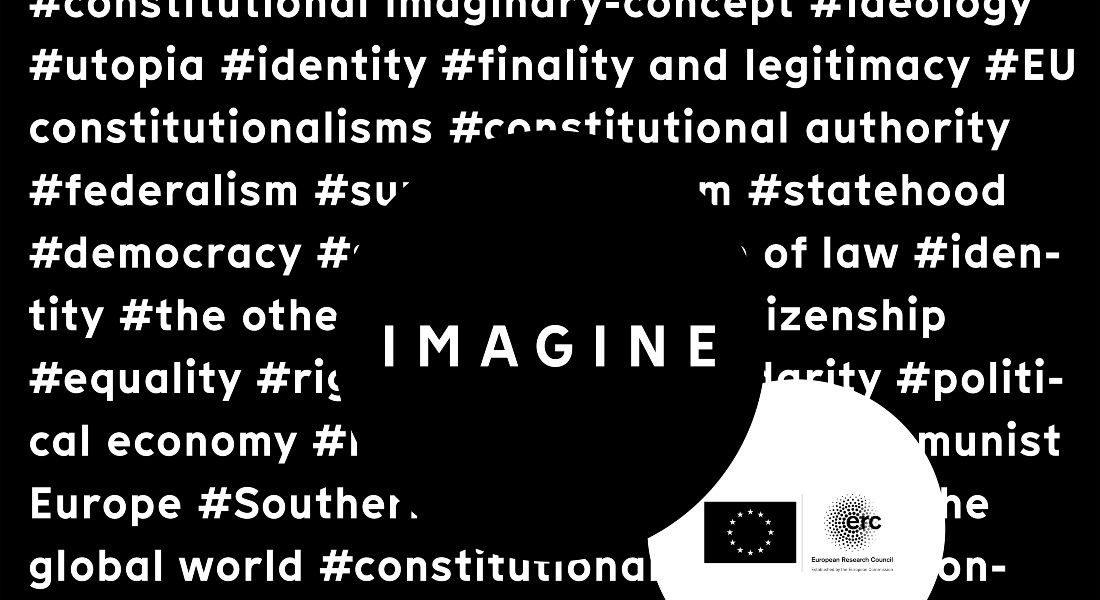 While there is an emerging scholarship that examines the ‘varieties of constitutionalism’[3] in Europe and how this variety affects the production of constitutional imaginaries in both sites – (nation/member) states and the EU, the published work concerns primarily conflicts between national highest courts and the European Court of Justice.[4] The broader intellectual debate among constitutional scholars and other intellectuals in the member states (who very often have engaged in public and policy debates) is missing from the picture.[5]

We think this is a mistake which calls for an urgent remedy; Constitutional Imaginaries of Europe, therefore comprises both how Europe is being imagined in national constitutions and how Europe affects the shape of constitutional law and theory in the member states.

As a distinctive feature of this project, we put a particular emphasis on post-communist Europe. The experience of what is also called the “Other Europe” from both before and after 1989 is more important for EU constitutionalism than the common view suggests.[6] The mainstream picture focuses on the process of transformation of the post-communist states into future members of the Union, seeking to comply with the political and economic criteria on EU membership.[7] However, the fall of communism in 1989 was also transformative for the Old Europe. The image of the Union as a guarantee of democracy and freedom from foreign domination, widespread in the Other Europe, incited changes in the deep structure of the Union as a whole. At the same time, the post-communist member states have brought with them their legacies that could be supressed only to a certain point (essentially, until they could stand in the way of the successful “return to Europe”). They re-emerged quickly after these states had joined the Union. Now, however, they become internal to its constitutional imaginary. Most existing constitutional law scholarship does not capture this.[8] Moreover, it presents the current challenges to the authority of EU law as something that comes from without, not within the Union.

[5] We however want to mention an ongoing project organized by Marco Dani, Marco Goldoni and Agustín José Menedéz, The Legitimacy of European Constitutional Orders: A Comparative Inquiry inspired by Ackerman’s book Revolutionary constitutions: charismatic leadership and the rule of law (The Belknap Press 2019).

[8] For an exception see Luuk Van Middelaar, The passage to Europe: How a continent became a union (Yale University Press 2013), 181-201; compare to e.g. Christopher J Bickerton, European Integration: From Nation-States to Member States (OUP 2012), which also has a historical ambition but does not examine the relevance of 1989 for its thesis.

We would like to reflect on this by how this conference is structured: it results from a series of workshops organized in four post-communist EU member states at the end of 2021 and the beginning of 2022. The workshops were preceded by several internal seminars and one IMAGINE workshop devoted to the history of political and constitutional ideas in Central and Easter Europe.[1]

Based on this previous work we have identified several overarching issues stemming from the debates on Europe and its constitutionalism in those member states. For the conference we invited scholars from the “old” member states to reflect on these issues and contributions stemming from the workshops. They will engage with scholars who have already taken part in the workshop. Through this we seek to avoid a certain hegemonic (and homogenizing) tendency in European constitutional scholarship, which often defines the concerns and issues to be debated through the perspective of the West (or the “old”) and its legal traditions - for example, how the rule of law or democracy are understood in the liberal-legalist constitutional thought or how the social question has been addressed by the Western welfare state – and abandoned when neoliberalism took over.

In order to put the different perspectives on European constitutional imaginaries in a true dialogue, we asked our speakers to present the paper written by someone else. This way we also hope to encourage discussions over long monologues and presentations. All draft papers will be available before the conference and we expect the participants to familiarize with them before the conference.

[1] For information on these events see IMAGINE web, https://www.imagine-const.eu/category/events/
imagine_events/.

Attila Antal holds a PhD in political science. He is a senior lecturer at Eötvös Loránd University Faculty of Law Institute of Political Science. He is a coordinator of the Social Theory Research Group at the Institute of Political History. He conducts his contemporary research in political theory of populism, social and critical theory, theory of democracy, green political thought, constitutionalism, political history. He is an editor at Eszmélet (a leading a Hungarian quarterly journal for social critique).

Marco Goldoni is Senior Lecturer in Legal Theory at the Law School of the University of Glasgow. He is the author of The Legacy of Pluralism (with M. Croce, 2020), The Materiality of the Legal Order (2022), and co-editor with M. Wilkinson of the Cambridge Handbook on the Material Constitution (2023). He is joint general editor of the Journal Jurisprudence and editor of the Routledge series Law and Politics: Continental Perspectives

Mary Heimann holds the Chair of Modern History at Cardiff University, where she also founded and directs the Central and East European Research Centre. Her best-known publications are Catholic Devotion in Victorian England (Oxford University Press), ‘Christianity in Western Europe from the Enlightenment to the Present Day’ in Adrian Hastings, A World History of Christianity (Cassell Group) and Czechoslovakia: The State that Failed (Yale University Press), republished in 2020 as Československo: stát, který zklamal (Petrkov), translated by Zdeněk Hron and with introductions by Jan Urban and Petr Pithart. She is currently writing a new book on Christianity behind the Iron Curtain for Yale University Press.

Michal Kopeček is a historian, head of the History of Ideas and Concepts Department at the Institute of Contemporary History in Prague and co-director of Imre Kertész Kolleg, Friedrich Schiller University, Jena. He was, among others, Leverhulme Vising Professor at the University of Cambridge in 2021 and 2022 and Visiting Professor at the Central European University in 2015. His research interests include the comparative modern intellectual history of East Central Europe, nationalism studies, history of state socialism and communism and the study of transition and democratization processes. Currently, he is working on his book project ‘Dissident Legacy in Post-Socialism’ focusing on Czechia, Hungary, Poland and Slovakia.

Michał Krotoszyński is an assistant professor in the Department of Theory and Philosophy of Law at the Faculty of Law and Administration, Adam Mickiewicz University, Poznań, Poland. He concentrates his research on transitional justice, legal interpretation and constitutional law. In 2017 he published a book Modele sprawiedliwości tranzycyjnej [Models of Transitional Justice], and is also the author of numerous articles and book chapters, many of which were published in English. He also works as an attorney, specializing in health care law and communications law. More information can be found HERE.

Martin Loughlin is Professor of Public Law at the London School of Economics & Political Science. He was educated at LSE, the University of Warwick and Harvard Law School and held chairs at the Universities of Glasgow and Manchester before returning to LSE in 2000. His publications include Against Constitutionalism (2022), Political Jurisprudence (2017), The British Constitution: A Very Short Introduction (2013), Foundations of Public Law (2010) and The Idea of Public Law (2003).

Maria Mälksoo is Senior Researcher at the Centre for Military Studies, Department of Political Science, University of Copenhagen. She holds the European Research Council’s Consolidator Grant RITUAL DETERRENCE (2022-2027) and leads the UCPH team of the Volkswagen Foundation-supported MEMOCRACY project (2021-2024). Besides articles and book chapters on memory politics, critical security studies and International Relations theory, she is the author of The Politics of Becoming European: A Study of Polish and Baltic Post-Cold War Security Imaginaries (Routledge, 2010); a co-author of Remembering Katyn (Polity, 2012); an editor of the Journal of International Relations and Development Special Issue “Uses of ‘the East’ in International Studies: provincializing IR from Central and Eastern Europe” (2021), and of the Handbook on the Politics of Memory (Edward Elgar, forthcoming 2023). She is currently serving as the President of the Central and East European International Studies Association (CEEISA) (2019-2022).

François-Xavier Millet: A graduate of Sciences Po (Paris), Sorbonne Law School and Jean Moulin University in Lyon, François-Xavier Millet obtained his Ph.D. at the European University Institute (Florence, Italy). Following his doctorate, he became an Associate Professor at the University of Toulouse before being appointed at the University of the French West Indies, on Guadeloupe island, as Full Professor of Public Law after successfully passing the agrégation in France. He has published numerous articles in the field of European Union law and comparative constitutional law in French, English and also Italian. He is the author of two monographs: Le contrôle de constitutionnalité des lois de transposition en France et en Allemagne (L’Harmattan, Paris, 2011) and L’Union européenne et l’identité constitutionnelle des États membres (LGDJ-Lextenso, Paris, 2013), for which he was awarded the prix de thèse du Conseil constitutionnel and the Mauro Cappelletti Prize. He has been a co-editor of the European Constitutional Law Review (EuConst) since 2016. He was a referendaire within the Chambers of Advocate General Bobek at the Court of Justice of the European Union between 2015 and 2021.

Karol Muszyński is a post-doctoral researcher at the Centre for Sociological Research at KU Leuven and a research fellow at the Centre for Education and Social Theory at the Faculty of Law, Administration, and Economics at University of Wroclaw. He previously worked at University of Warsaw as an assistant professor. He is interested in employment relations, violations and circumventions of law, access to justice, and involvement of social partners in policy making.

Kálmán Pócza is a Senior Research Fellow at the University of Public Service and Head of the Center for Constitutional Politics at the Mathias Corvinus Collegium. He is the Principal Investigator of the JUDICON-EU project. His research focuses on constitutional politics, judicial-legislative relations and constitutionalism. Most recent publications include Constitutional Politics and the Judiciary: Decision-making in Central and Eastern Europe (London/New York: Routledge, 2019, editor); How to Measure the Strength of Judicial Decisions: A Methodological Framework, in: German Law Journal 18(2017):6 (together with Gábor Dobos and Attila Gyulai).

Jiří Přibáň is an academic, author, translator and essayist specializing in the areas of philosophy, sociology and theory of law and constitutionalism. He is the founding director of the Centre of Law and Society and an editor of the Journal of Law and Society. He regularly contributes to the Czech and international media. His books include Constitutional Imaginaries (2021), Sovereignty in Post-Sovereign Society (2015), Legal Symbolism (2007) and Dissidents of Law (2002).

Johan Strang is an Associate Professor at the Centre for Nordic Studies, University of Helsinki. Trained as a philosopher, he is broadly interested in Nordic intellectual and political history. He has published on the history of Nordic cooperation, Nordic democracy, analytic philosophy, as well as on Scandinavian Legal Realism. Together with Stefan Nygård, he has contributed with a small state perspective to the discussion on transnational history, for example with the volume Decentering European intellectual space (2018)

Ulrich Wagrandl is a post-doctoral researcher at the Institute of Austrian and European Public Law at Vienna University of Economics and Business. His research interests include constitutional justice, general administrative law and administrative procedure as well as legal philosophy and political theory. His PhD thesis on the concept of militant democracy in Austrian constitutional law won an award by the Austrian Parliament. Latest publications include A theory of illiberal democracy, in Sajó, Uitz & Holmes (eds), Routledge Handbook of Illiberalism (2021) 94; The prohibition to abuse one's human rights: A theory, European Law Journal 25 (2019) 577; Transnational militant democracy, Global Constitutionalism 7 (2018) 143.

To attend the conference in person, please register here no later than 2nd October, 23.59.

To attend the conference via Zoom, please register here.