The Israeli Supreme Court and defense of human rights: challenges and solutions

Organised by: Dr Veronika Fikfak, associate professor University of Copenhagen and Embassy of Israel in Denmark

About the speaker and the talk: 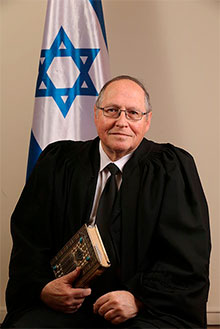 Elyakim Rubinstein is a former Vice President of the Supreme Court of Israel, who also served as the Attorney General of Israel from 1997 to 2004 and before this, a former Israeli diplomat and long-time civil servant. He has has an influential role in Israel’s internal and external affairs, most notably in helping to shape its peace treaties with Egypt and Jordan. He has written several books on Israel's Supreme Court, especially focusing on the relation of Judaism to Israeli political and legal life.

In his talk, he will speak about the biggest cases of the Israeli Supreme Court, the Court’s special jurisdiction in constitutional and administrative areas, as well as its expertise in international law.

Zoom link to the class:

Use this link to join Zoom Meeting

Organizer: iCourts and the Embassy of Israel in Denmark