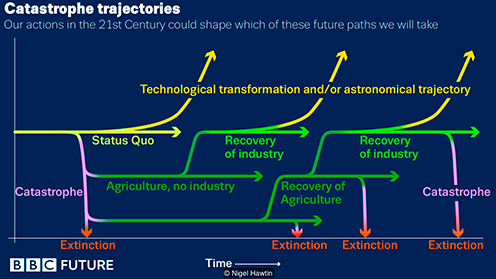 “Around the same time, a small, little-known group of researchers were meeting at a workshop in Gothenburg, Sweden with a goal to look much, much further ahead – far beyond this latest news cycle.”

In a recently published long-read article, entitled ‘The perils of short-termism: civilisation’s greatest threat’, BBC Future journalist Richard Fisher discusses how ‘our inability to look beyond the latest news cycle’ might serve as ‘one of the most dangerous traits of our generation’.

In the piece, part of the new BBC Future series on ‘Deep Civilization’, Fisher discusses a wide range of philosophical, economical, ecological, scientific, and artistic approaches to the longer-term future, and how these relate to our responsibility to steward the well-being of future generations.

In particular, Fischer spends 12 paragraphs discussing ‘Long-Term Trajectories of Human Civilization’, the “intriguing and readable” paper co-authored last-year by Matthijs Maas (PhD Fellow, CILCC and AI-LeD), which attempts to formalize a scientific and ethical discipline for examining how the short-term choices made by us may affect the trajectory of our society far into the future.

The BBC Future long-read can be found at http://www.bbc.com/future/story/20190109-the-perils-of-short-termism-civilisations-greatest-threat

The original paper can be found at http://gcrinstitute.org/papers/trajectories.pdf