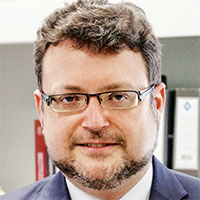 Lianos was previously Gutenberg Research Chair at France’s Ecole Nationale d’Administration, Vincent Wright chair at Sciences Po (Paris), Academic Director of the BRICS Competition Law and Policy Centre, Higher School of Economics, an Alexander von Humboldt fellow at WZB Berlin, an Emile Noel fellow at NYU law School, a visiting professor at the Universities of Chile in Santiago, the University of Strasbourg, among others, and has taught at many other Universities around the world.

In 2012, he was awarded the Philip Leverhulme prize for his seminal research. He is also a Laureat of the French Academy of Moral and Political Sciences (2005) and has received numerous prizes and scholarships for his research.

He is an elected member of the Board of the Competition Committee at the OECD since 2020.

His visit at CeBIL will also focus on the competition implications of the use of health related data in private health and insurance.